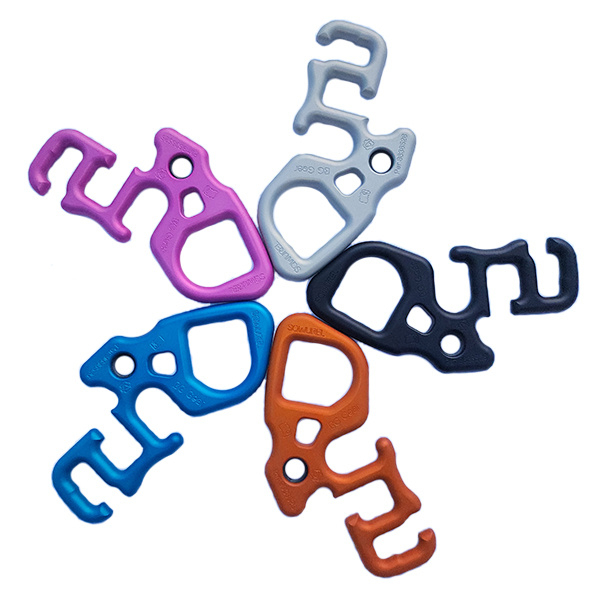 After using my prototype for a year and a half, I am convinced this is the best rappel device ever for long rappels. The ladder allows friction adjustments while on rappel and free-hanging (or not). The ladder allows for close increments of friction to be used, so your friction can be perfect every time, even if you chose wrong when going over the edge.

The downside is that it requires attention to be paid to the device while rappelling. Moving your brake hand to the side, out or in, can pop the rope out of the notch, resulting in a sudden loss of friction. Perhaps I flop my arms around more than most… Version 3 decreases the pop out tendency significantly. While I would not use it in Class C canyons (where I am an arm-flapping advanced BEGINNER), many real Class C canyoners in the PNW like and use the Sqwurel on a regular basis.

Not so hot with double ropes, but OK. It does twist up (sqwurel) the rope more than most devices. Sqwurel3 is said to have solved the twisting problems… I remain a skeptic until I have some time on the device.

I had been going through 2 Piranas a year, and got a year and a half out of my proto, though it is fair to say I drove it further than is reasonable, because new protos were not available. So I think this device is twice as durable as a Pirana or ATS.

Version 4 of the SQWUREL has been improved adding a few valuable features, all packed into the same small form factor of the Sqwurel 3.  Canyoneers on the lighter side will appreciate the modified throat geometry that now offers smooth rappeling during double rope rappels (even those of us who are not so small, or light will have a much-improved double rope experience with version 4).   The carabiner hole has been enlarged slightly to accommodate larger carabiners while at the same time the groove that holds the O-ring has been made tighter, so the O-ring now grabs the carabiner a little tighter than it used to (a little bit of the best of both worlds here).  The behemoth tab has been extended to offer a more secure hold of the rope while also adding a progress capture option to tighten guided rappel lines.  Also added are 4 wrenches of 11mm, 12mm, 13mm and 14mm that will fit most rapid sizes you will find in canyon.  The rapid wrenches allow tightening and loosening stubborn rapids that are too tight for bare hands.

Colors are back!! I was able to source anodizing at a reasonable cost.  Many people asked for colors to come back and here they are!  FYI the Honey Badger color is difficult to photograph since how it looks depends on the light it is in.  I direct sunlight it takes on a silver look and looks close to raw aluminum but in lower light like in the shade, heavy cloud cover or indoors it is a subdued gold color.  The color shifting appearance of Honey Badger makes it a very interesting color but is difficult to photograph.

Instructions and Other Links: