What is the right carabiner for me?

Different climbing tasks require different kinds of carabiners. To choose and use them properly, you must first understand the differences between them.
There are four main areas to consider:

Once you understand the differences, think about your needs. What type of climbing you do and how you’ll use the carabiner will determine what carabiner you buy. 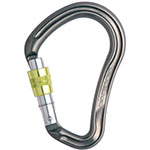 The HMS (short for the German "Halbmastwurf Sicherung") is essentially a very large offset D. The extra size creates a wider and thicker top bar, allowing ropes to run very smoothly. For this reason, many people will choose to belay with an HMS carabiner. The extra width and larger gate opening also allow multiple ropes or knots (such as the Munter tow hook or two toe hooks) to be attached.

These are sometimes called HMS carabiners, and some are even marked with HMS on the back. HMS states that the carabiner is designed with a wide, more symmetrical top that works well with a Münter hitch.

D-shaped carabiners are excellent for most types of climbing. They hold loads off-center to the stronger, non-gated side, so a smaller, lighter D carabiner can be just as strong as a larger oval.

Oval carabiners are the original style. They are versatile and affordable, but not as strong as other shapes. Oval carabiners have smooth, uniform top and bottom curves to limit load movement. They offer more acceleration capacity than D-shaped carabiners and their symmetry allows them to be used for brake carabiners.

They are ideal for climbing assistance as they center the loads on their curve; runners do not shift under load.

Standard straight gates are strong, durable and easy to use. They are very common and used for different purposes. Straight port carabiners can be found on quickdraws and are often used for racking equipment, such as cams and stoppers. As the name implies, they are perfectly straight from the pivot point to the end. Like most other types, they are spring loaded to open easily when pressed, but close automatically when released.

Some straight port carabiners are also key lock carabiners. A keylock carabiner has a smooth notch where the nose of the carabiner and the gate interact. This will keep the carabiner from snagging and snagging on the loop of your harness, bolt hangers and other slings, all of which can be quite annoying. You'll probably pay a little extra for this feature, but it's a nice upgrade.

These strong, durable gates have a concave shape that makes cutting a rope quick and easy; they are generally reserved for the rope-end of quickdraws.

Wiregate carabiners use a loop of stainless steel wire for a gate, reducing overall weight and eliminating the need for additional parts found with conventional gates. Wiregate designs also allow for larger port openings. They are less likely to freeze than other gate styles in cold, wet weather.

While wiregates don't seem as strong as conventional styles, most are. Due to the lower mass in the gate itself, wire gates are also less likely to vibrate open during a fall. (This is called gate lash. See below for more information on gate lash.)

Locking of carabiners have ports that can be locked in the closed position to provide additional protection against accidental port openings. They have a manual (also called screw lock) or automatic locking system. 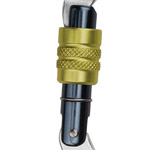 Screwgate carabiner Snap ports (straight, curved, or wire) make sense for quickdraws where clipping speed is critical, but a locking carabiner adds security when belaying a partner or building belay installations. Screw gates are the most common form of locking gates and offer great value, but they do rely on the user to remember to pop the drive up every time. Keylock clean noses are becoming more common and help prevent snags. 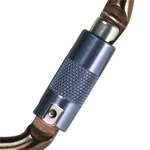 Twistlock carabiner Automatic locking mechanisms like the Twistlock reduce the chances of forgetting to lock the carabiner. However, they can be trickier to open than screw gates (especially with one hand) and will usually cost a little more. 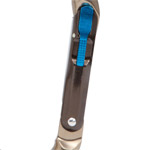 Carabiners with screw locking ports require the user to manually screw the sleeve onto the port to lock it.

Auto-lock carabiners lock automatically when the gate is closed.

Locking carabiners, while heavier than non-locking models, are the only choice for use with a belay/descent device. Also consider using them at belay stations and critical shelters. They provide a more secure bond and increase your peace of mind.

Carabiners come in a variety of sizes. Large carabiners are typically easier to handle and easier to clip (they have larger gate openings), and they can hold more gear inside. They are commonly used with belay and rappel devices. Smaller carabiners are lighter and take up less room on your rack, but they can be harder to clip.

Gate open clearance, provided in millimeters, is something you may want to pay attention to when looking at the size of a carabiner. This number refers to the width that the gate can open, plus the depth and shape of the bottom of the carabiner below the gate. Generally the smaller the carabiner, the less clearance it offers.

Too little gate-open clearance may lead to your finger getting stuck between the gate and the carabiner body while clipping; too deep a clearance can also make the carabiner difficult to clip. An ideal amount makes clipping the carabiner easy.

In general, the less weight you carry with you as you climb, the better. But lighter carabiners are not always best. Superlight carabiners are often smaller, which can make them harder to use when you’re clipping the rope or a bolt. Also, lightweight carabiners often use narrower rod stock, which can mean lower gate-open strengths and shorter lifespans. Narrow carabiners can also cause more rope wear, since the narrow ends can act like edges, biting into your weighted rope as it slides past.

Carabiners are rated for strength in three directions: lengthwise (major axis), sideways (minor axis) and while open (major axis open or "gate open"). These ratings are typically marked on the spine of the carabinerAll climbing carabiners pass UIAA and CE standards, which means they are plenty strong enough as long as you use them correctly. Gate-open strength and minor-axis strength are where you see the most variation.

Here’s how you might use strength ratings: If you’ve narrowed your search to a few different carabiners that will work well for your style of climbing, look at the strength ratings as one of the final decision points. If one carabiner provides everything you need and is stronger than the others, then you might as well go with that one. Keep in mind that smaller and lighter carabiners are generally weaker than bigger, heavier ones, but not always.

A note about gate lash: The dynamics of just about any climbing fall can cause gate lash, which can reduce a carabiner's overall strength to its open-gate strength, creating a higher likelihood that the carabiner could break. It can occur when:

To protect yourself against this type of carabiner failure, choose carabiners with specific gate designs (such as a wiregate) and/or stiff spring tensions. You can also opt for carabiners with locking gates and/or high gate-open strengths (REI provides both gate-closed and gate-open strength ratings on the product page Specs tab). Ask an experienced REI salesperson for recommendations.

Which Carabiner To Use

Once you understand how shape, gate type, size, weight and strength affect performance, it’s helpful to think about how you’ll be using the carabiners.

Features that make a carabiner great for one type of climbing might not make it so great for another. For example, small wiregate carabiners can be great for racking gear to keep your rack light or for making lightweight trad quickdraws, but they won’t be as easy to clip as larger, heavier carabiners.

Most experienced climbers develop a preference for carabiners of a certain size and shape and with a certain gate type. If you’re just starting out, here are some general recommendations:

Use type of Carabiner

HMS Carabiner When belaying it is important to use a carabiner with a generous top beam. Small, narrow-angled D-shapes can exert too much friction on the rope and make belaying catchy and unpredictable. An HMS carabiner is ideal, but it's important to remember that screw gates must be locked manually every time. This explains why auto-locking HMS options are also popular. One of the other belay hazards is that the carabiner will spin and load across the gate. Specific belay carabiners that catch the belay loop can prevent this. 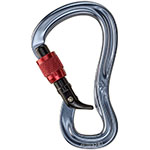 Belay Carabiner Creating safe belay positions at the end of a field is a skill in itself. Locking carabiners (usually offset D-shaped screw holes) should be used to attach slings or the rope to the guard. You will often have to bring together a few slings and/or bends of rope in one hub. This central point often requires a large HMS carabiner. The key is to have multiple screw-lock carabiners on your harness to handle all eventualities. 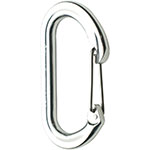 Snapgate Anchors, hexes, cams, slings, and even approach shoes often need to be attached to your harness. Simple snapgate carabiners (straight, curved, or wire) are the best way to do this. An oval shape is ideal for storing nuts.

If you have studied the carabiner versions, it may be useful to visit CanyonZone or another outdoor sports store. Grab a few models and feel how they fit in your hand, how easy they are to click and release, and how smooth the gates work. Before locking carabiners, try locking and unlocking the gate a few times (with one hand). Choose models that feel good, work smoothly and are easy to work with.

Your safety is your responsibility. Make sure you practice the right techniques and safety guidelines before you practise​ (outdoor) sports

Overview Knowledge base General canyoning and caving equipment : Go back.