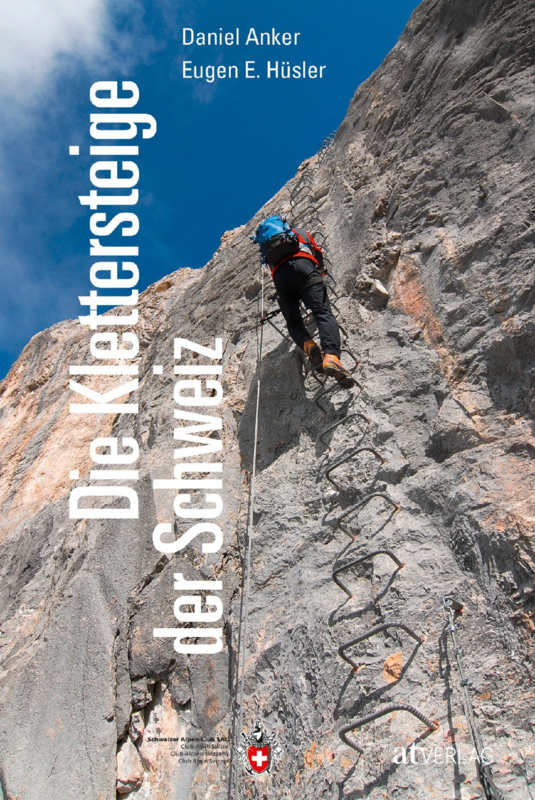 For a reading sample in PDF

The Via Ferrata experience - also for beginners
Via ferratas are routes that are accessible to beginners and non-climbers thanks to fixed wire ropes and artificial stopping points. They combine the experience of nature with a sporting challenge and a pinch of adventure.

In this via ferrata guide, all 100 via ferratas in Switzerland and some of the neighboring countries are presented in detail with informative texts and numerous color images, supplemented by maps, topographies and diagrams. It also lists those via ferratas that can only be climbed with a mountain guide, as well as around 50 other tours with secured passages.
The «via ferrata cross» invented by Eugen E. Hüsler shows at a glance the difficulties to be expected and the nature of the tour.

The authors, experienced via ferrata experts and authors of numerous guides and publications on the topics of via ferrata and mountain hiking, present all Swiss via ferratas and vie ferrate and everything you need to know about them in this book.
They explain what constitutes safe climbing equipment, what the greatest dangers on the rock are and where the best routes in Switzerland can be found. Their 10 rules for via ferrata climbers are also vital, but easy to remember.

All via ferrata are divided into levels of difficulty
Each via ferrata is divided into six levels from easy (K1) to extremely difficult (K6) according to the “Hüsler difficulty scale”.
The climbing routes are rated according to altitude (valley, low mountain range, high Alps), ascent and descent performance, terrain characteristics and inclination (forest, grass, crags, rock, snow, ice), route length, path conditions on ascent and descent (paved paths, track , pathless), orientation (markings), route characteristics (type of safety devices, length) and exposure of the route.

In the inside flap of the book, all via ferratas are divided into the categories via ferrata, sport via ferrata, alpine route and secured route in a clear table according to the level of difficulty.

The skills that a via ferrata climber should bring with them to cope with a certain via ferrata are graphically summarized in “Hüsler's Via Ferrata Cross (HKK)”: mountain experience, strength, endurance and mental resilience. This shows what the Via Ferrata is like: whether it will be a short, extremely airy route or a long, strenuous ridge crossing. The HKK supplements the total difficulty (K) for all via ferrata in this guide - an additional service for users.

Pack the via ferrata set, harness and climbing shoes and off to the next via ferrata!